Honorary Members
of the Corps

Colonels of the Corps, Emeritus

Sergeant Majors of the Corps, Emeritus


Sergeant Majors of the Corps, Emeritus

As the Senior Enlisted Advisor, US Army Installation Management Command-Atlantic Region where he earned recognition from the Commanding General for being the best Senior Enlisted Advisor. His expertise in base support service delivery has impacted the entire Army and launched a corporate strategy highlighting customer satisfaction and workforce empowerment which increased productivity in delivering Logistics services by 25%. CSM Durr led the evaluation of organizational performance and assessed where improvements or innovation was most needed to ensure superior logistics support to customers at 31 Army Installations and guided an integrated approach to key management functions that led to Army and Department of Defense logistics excellence awards for subordinate organizations.

As the Senior Enlisted Advisor for the United States Army Installation Management Command – Southeast Region, CSM Durr earned recognition from the Commanding General for superior emphasis on service quality and was selected to lead the largest service organization in the command –IMCOM Atlantic Region. He provided oversight and guidance of an Inspection Program that ensured predetermined outcomes were achieved for superior Central Issue Facility services for deploying forces. CSM Durr championed evaluation criteria to measure various organizational policies, programs, and training that resulted in improved logistics service outputs and outcomes for customers and enforced Common Levels of Support and service delivery/facility maintenance standards that resulted in a 25% improvement in customer satisfaction ratings.

Command Sergeant Major David Roman enlisted in the Army in 1978 and retired from active duty on 30 April 2010. He is a graduate from the United States Army Sergeant’s Major Academy and holds a Bachelor’s Degree from Regents College of New York.

CSM Small was born in Savannah, Georgia, and enlisted in the U.S. Army in 1958 as a Supply Specialist. His 34 years of active duty service included three tours in Korea, two tours in Germany, and one tour each in Vietnam and Belgium, in addition to a wide range of Quartermaster positions across the continental United States.

CSM Small graduated from the Sergeants Major Academy at Fort Bliss, Texas, in 1977, and over the course of the next 12 years served as a senior Quartermaster Noncommissioned Officer at Fort Lee; in Wiesbaden, Germany; and Taegu, Korea. A Distinguished Member of the Quartermaster Regiment, his many awards and decorations also include the Legion of Merit with one oak leaf cluster and a Bronze Star Medal.

Among his many outstanding accomplishments CSM Small served as the first Commandant of the Quartermaster Noncommissioned Officer Academy here at Fort Lee. The foundation and standards he established in 1987 are still reflected in the high caliber graduates of the Quartermaster NCO Academy to this day.

CSM Small's last active duty assignment before his retirement in 1993 was as Post Command Sergeant Major at Fort McPherson, Georgia. 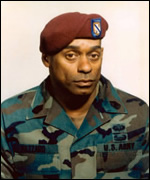 CSM Hazzard enlisted in the United States Army at Philadelphia, Pennsylvania, in 1960. During the ensuing 35 years of active duty service he served in all Noncommissioned Officer leadership positions: a Squad Leader in Basic and Advanced Individual Training in 1960, a Corporal in 1961, a Sergeant in 1965, a Staff Sergeant in 1966, a Sergeant First Class in 1967 (acting First Sergeant), a First Sergeant in 1972, and promoted to Command Sergeant Major in 1977.

CSM Hazzard's foreign service includes tours in Korea, Vietnam, Germany, and several temporary duties in other foreign countries - in addition to major assignments at key installations throughout the United States. His many awards and decorations include the Bronze Star Medal with three oak leaf clusters, the Joint Service Commendation Medal, the Army Commendation Medal with four oak leaf clusters, the Vietnam Cross of Gallantry, and several other individual and unit awards. He also earned the Parachutist and Air Assault Badge.

CSM Patton was born in Nacogdoches, Texas, and enlisted in the U.S. Army in November 1965. He completed basic training at Fort Polk, Louisiana, and advanced individual training at Fort Ord, California. He later completed airborne training, Subsistence Food Storage Course, instructor training, and the First Sergeant Course, and is a graduate of the Sergeants Major Academy at Fort Bliss, Texas.

CSM Patton served on active duty for more than thirty years, first as an Infantryman and later as a Quartermaster. His service included two years and three months in Vietnam with the 173d Airborne Infantry Brigade and the United States Army Headquarters Area Command, Vietnam. He also served as a Supply Sergeant at the Company, Battalion and Brigade level, and as the NCOIC of Logistics Support, 800th Corps Material Management Center; as Command Sergeant Major for the 142d Supply and Service Battalion in Wiesbaden, Germany; and Command Sergeant Major for the 23d Quartermaster Brigade here at Fort Lee.

In recognition of his outstanding career, following his retirement from active duty, CSM Patton was selected by The Quartermaster General in 1996 to serve as the third Honorary Sergeant Major of the Quartermaster Regiment.

Sergeant Major Marigliano, a native of Brooklyn, New York, entered the U.S. Army Reserve in March 1952, during the height of the Korean Conflict, and was called to active duty one year later. After a tour with the 30th Infantry Regiment, he was reclassified as a Pipeline Engineer and assigned to the 523rd Engineer Company (Pipeline) which was attached to the 1st Marine Air Wing, Republic of Korea. His assignments to Quartermaster units began with the transfer of pipeline proponency to the Quartermaster Corps in 1955. Drawing upon his wide background in pipeline and tank farm construction, Sergeant Major Marigliano applied his skills in operating and maintaining pipelines throughout the military. In addition to Korea, his overseas duty took him to Okinawa and Vietnam. He also served four tours with the Quartermaster School's Petroleum and Water Department.

After retiring in 1980, Sergeant Major Marigliano became a site manager for the Department of Energy's Strategic Petroleum Reserve in Freeport, Texas. He later relocated to Virginia and at the time of induction served as a senior military analyst with the Directorate of Combat Developments, U.S. Army Quartermaster School. In recognition of his unparalleled knowledge and experience with liquid logistics, he held the position of TRADOC Project Officer for field water supply; and in that position served with distinction on key exercises such as Bright Star and Gallant Eagle, and Operation Desert Storm. In further recognition of his lifelong contribution to the Quartermaster Corps, Sergeant Major Marigliano also served as Honorary Sergeant Major of the Quartermaster Regiment.